Lonely cliffs and waterfalls, If no one sees me I'm not here at all....

I've been reading several blog posts about crafting resolutions for 2014 and thought that it would be good to set myself a few goals to encourage me to spend more time crafting and to also challenge myself to learn some new skills too.
I've reorganised my crafting space so that I can fit my sewing related items alongside my jewellery making equipment and beads. This has helped me take stock of the many beads, fabrics and patterns I have collected over the last few years and I have come up with the following projects for this year:

The photograph on the dashboard, taken years ago.....

When I saw the Salt Air by Moda fabrics in a magazine I fell in love instantly with the colour palette and new that I wanted to make a lap quilt with it.  With my limited sewing skills and basic sewing machine I knew this was going to be challenging, but rather than let myself be dissuaded I convinced myself that it would be ok to buy the layer cake and store it safely until I could be trusted with such a project.....
My beaux-parents live on the north-lincolnshire coast and have worked hard to transform a run-down chalet into a beautiful beach-style home. The Salt-Air palette was a perfect match for the property and so I decided to split the layer cake so that I could make 2 lap quilts instead and gift one to them as a Christmas present.
I designed the layout myself, and chose a fairly thick wadding for the inside as I wanted the quilt to be warm. The quilt top went together quickly but basting all three layers together was much more difficult than I had anticipated.  I had wanted to quilt it using wavy lines but decided against this as I wasn't convinced that this was the right time to experiment with anything other than straight lines.
My straight lines ended up not being perfectly straight as the bulk of the quilt was quite hard to get under the machine and I also ended up with some puckers on the back.   I also wish I'd made the binding half an inch wider to compensate for the thicker quilt but overall I was pleased with how it turned out.  It's not perfect but it's not bad given my set up.
I finished it days later than I had hoped and loaded it into the washing machine on 23rd Dec knowing that I could get it washed but not necessarily dried ready for the following days drive to Cleethorpes.....at least that was the plan.....The washine machine chose this particular evening and this particular load to stop working and the quilt was trapped inside, mid-cycle.  When we tried to drain it,  it started adding more water as though it was starting a new cycle and we ended up having to trick it into unlocking the door whilst trying to guide as much water as possible using a flexible chopping board into a washing up bowl and hoping that the massive towel we put down was enough to stop the floor being flooded. Went to bed that night with the quilt drip drying over the bathtub but by the time I had returned home from work the next afternoon it was perfectly dry and ready for wrapping.! My Christmas Miracle!
Here are some photos of it in the cosy lounge of my beaux-parents new lounge..

My belle-mere is particularly fond of bunting so last christmas I made some festive bunting which was hanging from the beams. 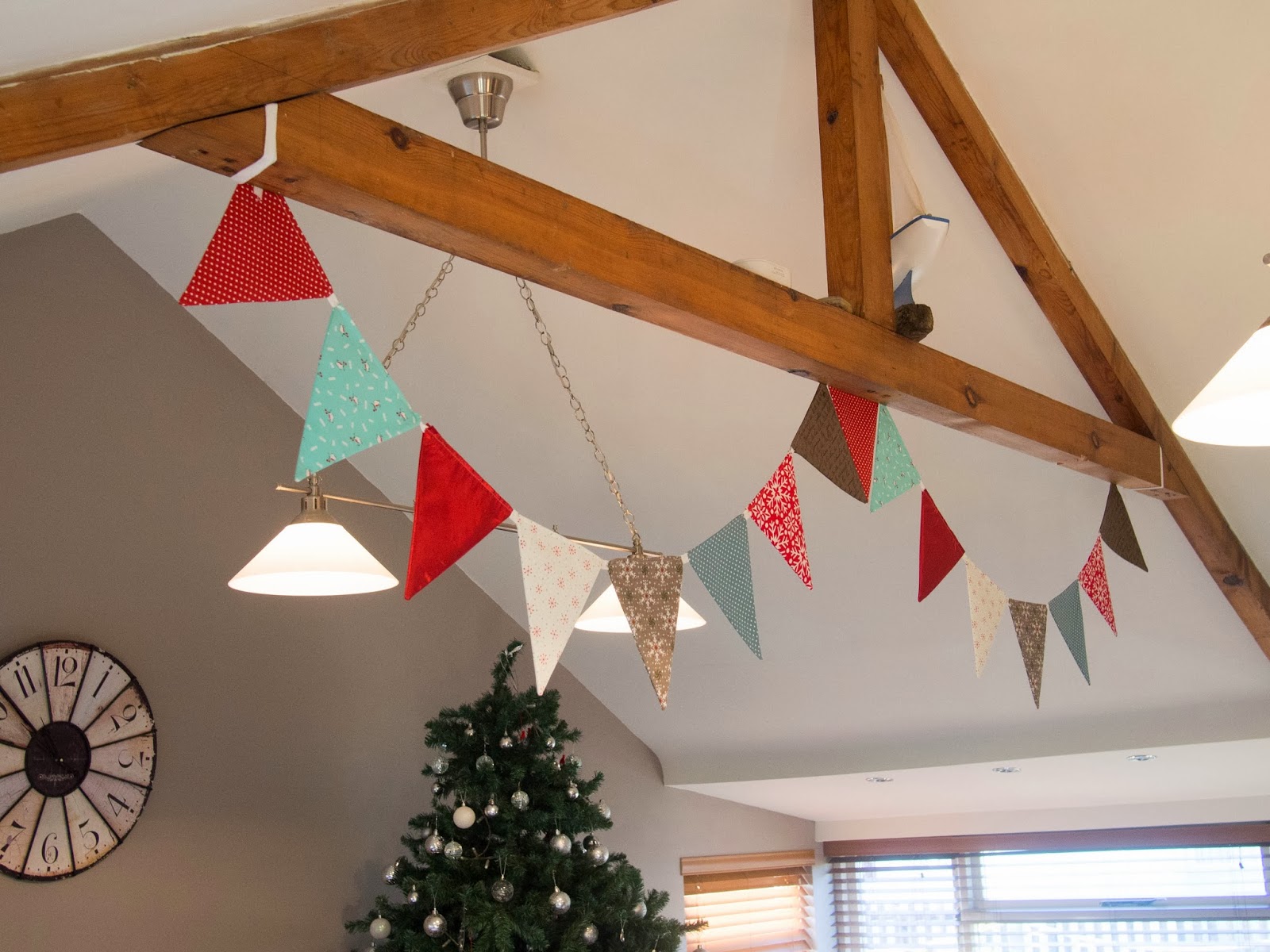 I had planned to make more christmas gifts this year, but the quilt was a fairly epic project for me and I didn't get have time to make the stockings I planned over a year ago for my nieces and nephews.  I'll put these back on my to do list for 2014 and will maybe try to start them in June in order to be in with a chance of getting them completed.
I did however manage to make this little cosmetic bag using a tutorial by Noodlehead which was so easy to knock up the practice one that as well as making one as a secret santa gift I made another as a birthday present.


This was also the first time that I got to use the zipper foot on my sewing machine which wasn't as hard to use as I had thought (thanks to some you tube videos) and I also found a tutorial by Flossie Teacakes which explained how to cover the ends of the zips. 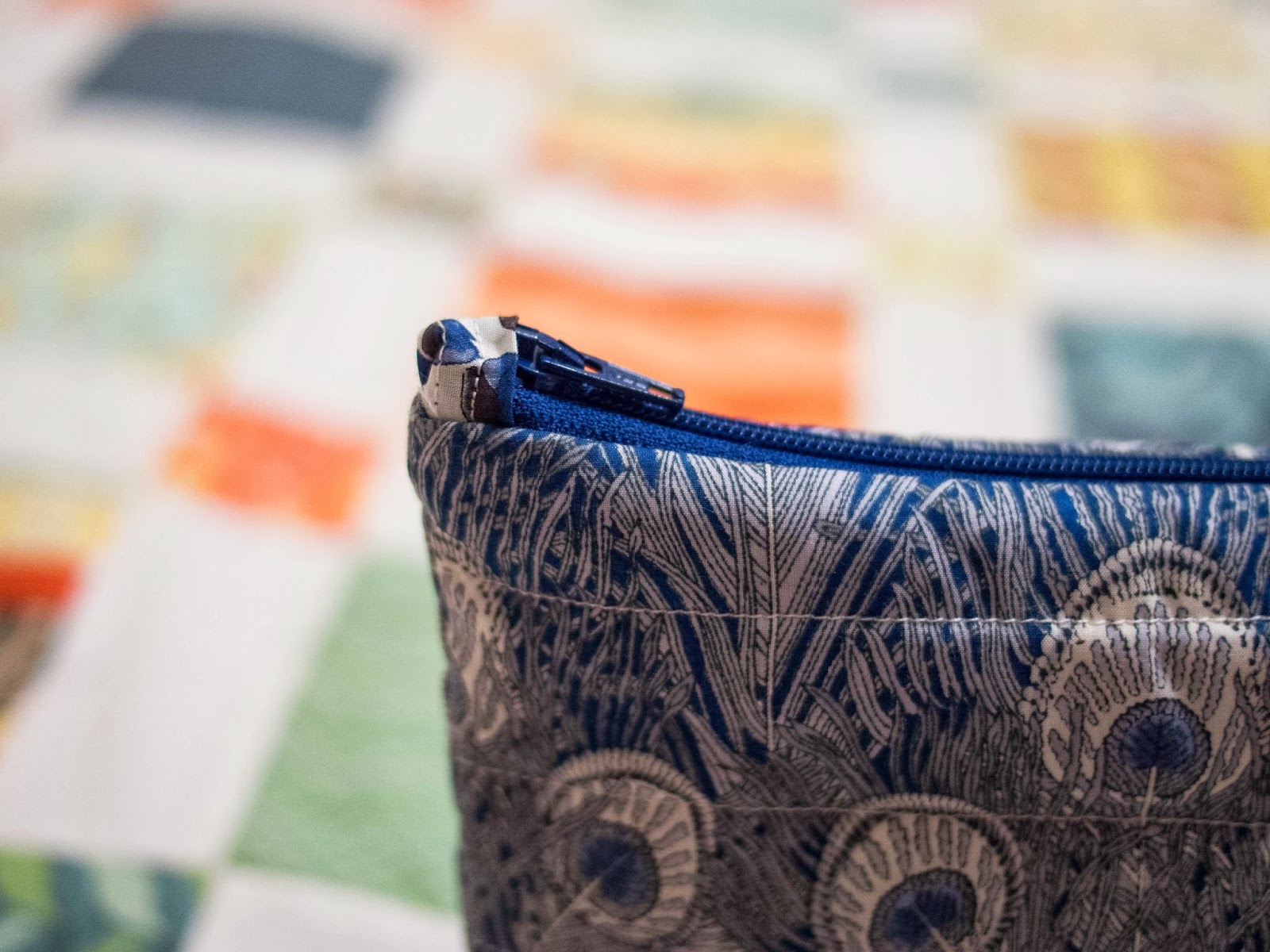 I enjoyed making these little bags so much that I think I might make some more. I'm in need of something to store my knitting needles & crochet hooks so I might make myself another and use it to practice a bit of free-motion quilting.
Posted by Andrea at 21:39 No comments:

My Kingdom for a kiss upon her shoulder

This Grecian beach dress has been on my make list for almost a year.  Since seeing it in the August 2012 issue of Making magazine I knew it was one that I would make once I had got to grips with my first sewing machine.
I found the perfect fabric for this at the Sewing for Pleasure fair at the NEC earlier this year.
The fabric is by John Kaldor and is a really slinky jersey knit fabric used by Phase Eight and I bought what remained of the bolt end (just under 3 metres for £20) and I have just enough left to make a shorter-length version.
The original pattern is a knee length dress with a contrast hem but I decided instead to make a floor length version and omit the contrasting trim.


It's construction is very simple. The bodice is made from just two rectangles, two 4cm strips from the entire width form the ties and another two rectangles for the skirt.
Instead of cutting two skirt pieces, I decided in the end to cut a piece long enough to reach the floor and use the whole width of the fabric (just over 150cm), meaning there would be just one seam at the back rather than at each side.
In total I cut five pieces for the whole pattern!.

I have never worked with a stretchy fabric before, so I was a little worried that stitching the pieces together would be a nightmare. I had read on the Internet that using ballpoint needles and a walking foot were good ways of ensuring that the fabric would glide through the machine.  I was too impatient to go and hunt out the needles so opted for just using the walking foot. It took a little getting used to but I found that giving the fabric a slight stretch helped too.

The fabric did take a little bit of getting used to but overall it wasn't as bad as I had imagined.  The zigzag stitching used to finish the hem on the waist seam and the rouleaux ties was easier to do when stretching the fabric slightly, but it did have a tendency to veer off to one side.
For all other seams I used a double turned hem and a straight stitch.


I had never heard of rouleaux until the Great British Sewing Bee, and remembering how easy the contestants made it seem, I thought it couldn't be that bad.
Three metres of rouleaux is probably a bit ambitious for a beginner, particularly on a stretchy fabric. It's a long time to have to wait for that "ta daa!" moment. At every point where the channel narrowed due to my slightly off-course stitching I had to apply enough force to pull the fabric back on itself but still be gentle so as not to over-stretch and break the stitching.

This part of the dress construction took the best part of an hour or so and was by far the most complicated part of the whole process.

The rest of the dress was relatively simple to put together.  As I was using a patterned fabric I knew the double twists on the shoulders would not look right if the underside of the fabric was showing.  To fix this, once I had sewn the bodice to the skirt I added a short run of stitches linking the outer edges of the shoulder piece together at the point of the twist. This was enough to prevent the underside from showing.

A small piece of the tie was used to create a loop to attach the ties at the front of the dress.
The ties are then looped round the waist twice and tied at the back to give the dress a Grecian look.

This shouldn't have been my first dress.  I already have another two dresses which are either in the process of being cut out or in need of a few adjustments before being completed, but as these dresses are more form fitting I decided to put them to one side in favour of a cooler dress for summer.

Thanks to the glorious weather over the weekend, I got the chance to wear it out in public.  It's a really comfortable dress to wear and as I was able to choose the length myself - I don't have to worry about the hem getting tatty or having to hoist it up to prevent tripping over it when on the move.

The fabric is also great because it doesn't seem to crease, which makes it perfect for holidays.

Since wearing it out several of my friends have commented on how lovely it is and are amazed that I made it.  It really is a simple dress to make and I will definitely be making more versions of this dress in the future.

Some time back in 2010 I created my first blog post. I’d been making my own jewellery for a few years and thought that writing about what I was making would encourage me to turn more of my ideas into finished pieces. I hadn’t factored into that equation how rubbish I am at actually remembering to write stuff or how lazy I’d become at setting time aside to sit and craft.

Plot the trajectory based on todays post and my fourth one is currently estimated sometime around September 2016!

A couple of things have changed for me though, which makes me hopeful that my updates will be more frequent. Last summer I joined a craft group called sewmakebelieve, mainly as a way to meet new people but also as a way to expand on my craft skills. In the last year I learnt to knit, sew and crochet thanks to the infectious crafting enthusiasm of the other members and the wonderful organisers Caroline, Kate and Zoe. I am also now working a lot closer to where I live, so the reduced commute and lower stress levels of the job itself are helping me to balance my work/life ratio. I feel more inclined to craft in the evenings now rather than just wanting to switch myself off completely.

I’ve created this blog as a way for me to document the things that I make and bake, and while I’m at it, I’ll share some stories and photos of some of the places I’ve visited.
Posted by Andrea at 21:44 No comments:

Andrea
Coventry, West Midlands
I seem to have a genetic pre-disposition towards all things craft-related or handmade. My main obsession is creating jewellery.